After years of negotiation with the administration, the membership of United Academics voted to ratify the newest Collective Bargaining Agreement (CBA). You can view the CBA here. Here are some highlights:

The Collective Bargaining Agreement (CBA) ratified in July left several key issues to an appendix of implementation agreements to be worked out over the following months and beyond, including caregiving supports; proposed changes to the Tenure Reduction Program (TRP); the role of service in our work; pay equity; and our units’ policies on merit, performance and promotion reviews, and professional responsibilities. Send us an email at [email protected] to express interest in joining us in this work. Feel free to reach out to ask any clarifying questions you might have.

Implementation Agreement #2 of the CBA requires that unit merit policies be revised by June 2023—in advance of distributing merit raises (out of a 3% pool) in January 2024.

Similarly, unit policies on professional responsibilities (i.e., workload and assignment of work duties), performance reviews, and promotion and tenure reviews need to be revised by June 2024.

In consultation with deans, the administration is preparing policy templates for units in part to ensure that new unit policies will be in line with the current collective bargaining agreement (CBA) language. The use of templates is fine—and helpful!—as long as everyone is clear that they are starting points rather than ends in themselves.

It may be tempting to speed through the process of revising policies, and there would be clear benefits to reducing ambiguity or uncertainty sooner rather than later. However, it’s even more important that this process of reviewing and revising unit policies be thorough, transparent, and genuinely participatory.

This is where the rubber meets the road in terms of shared governance. As with local elections, we have the most power to influence the outcomes within our own units. If we want to transform the nature of our work, how our duties are assigned, or how our performance is measured and rewarded, this is our opportunity. Let us seize it.

At the close of our negotiations last June, the administration presented a new proposal to change the Tenure Reduction Program. Because we received this new proposal two days before the last planned bargaining session, our bargaining team felt strongly that we did not have enough input from our members to accept or reject the offer. We also did not have enough time to submit changes to the proposal. As a result, the administration and the union agreed to hold a separate vote on this proposal after the ratification of the Contract Bargaining Agreement (CBA).

The brand-new Caregiving article (Article 34) in the CBA:

The burdens of service assignments are not generally distributed equitably among faculty along the dimensions of race, ethnicity, gender, classification, category, or rank. Inequities in service burdens lead to professional advantages for those who avoid or neglect service obligations while creating professional obstacles for those who take on more service responsibilities or discharge them more diligently. Negative impacts may include foregone merit increases, delayed promotion, failed promotion, nonrenewal, or layoff.

Implementation Agreement #3 of the CBA calls for a joint committee to consider how to enhance the equitable distribution of service, informed by the ongoing work of the UO Senate Task Force on Service.

These two mechanisms are in addition to the ongoing work of UO’s Office of Investigations and Civil Rights Compliance (OICRC) and the role of Oregon’s Bureau of Labor & Industries in enforcing the Oregon Equal Pay Act (OEPA). Individual cases of pay inequity can always be explored—and hopefully resolved—through these channels. Our goal with the pay equity studies is to tackle many potential cases in parallel in the interests of efficiency.

No more contracts and renewals: The current system of one-, two-, and three-year contracts is vastly better than having no job security at all. We have, however, run into some fairly significant problems. As Deans ordered cuts, departments and units were forced to choose among the faculty who happened to be up for renewal. This led to situations where only faculty who had achieved promotion could be non-renewed, which was not always ideal. We also saw an increase in contracts that offered low FTE in the second and third years of contracts – 1.0, 0.1, 0.1 contracts. And, of course, we had the events of this spring, a disaster we cannot allow to be repeated.

The system described below would address many of these issues and only applies to non-funding contingent Career faculty. It will not be perfect, and it will not guarantee that a Career faculty member can never lose their job, but we believe that this will be a much better system with stronger protections than our current one.

Expectation and rationale: Non-funding contingent Career faculty will have the expectation of continued employment that can only be ended for legitimate financial, academic, or performance reasons after the first year of employment. Career faculty in their first year can be laid off for any reason.

Expedited arbitration: Faculty who have received a layoff notice will be able to challenge the legitimacy of the layoff through an expedited binding arbitration process. The goal will be to have the layoff notice formally reviewed before it goes into effect. This system will replace the current grievance-arbitration system that can take several months to complete.

FTE maintenance: Assigned FTE cannot go down, except by mutual agreement between the faculty member and university.

Rehire at same FTE: While we have not worked out a complete recall system, we have agreed that faculty members hired back by the university into the same category – instructor, research assistant, research associate, lecturer, librarian, etc. – cannot be hired at a lower FTE than what they held before they were laid off.

Meet the Team Bargaining the Details

What's your current rank? Professor & Director of Graduate Studies
Where do you work? Philosophy

The Collective Bargaining Agreement is the contract between the University of Oregon and United Academics. This version of the CBA is the most up-to-date version, incorporating several Memoranda of Understanding and copy-edited through a mutual process. 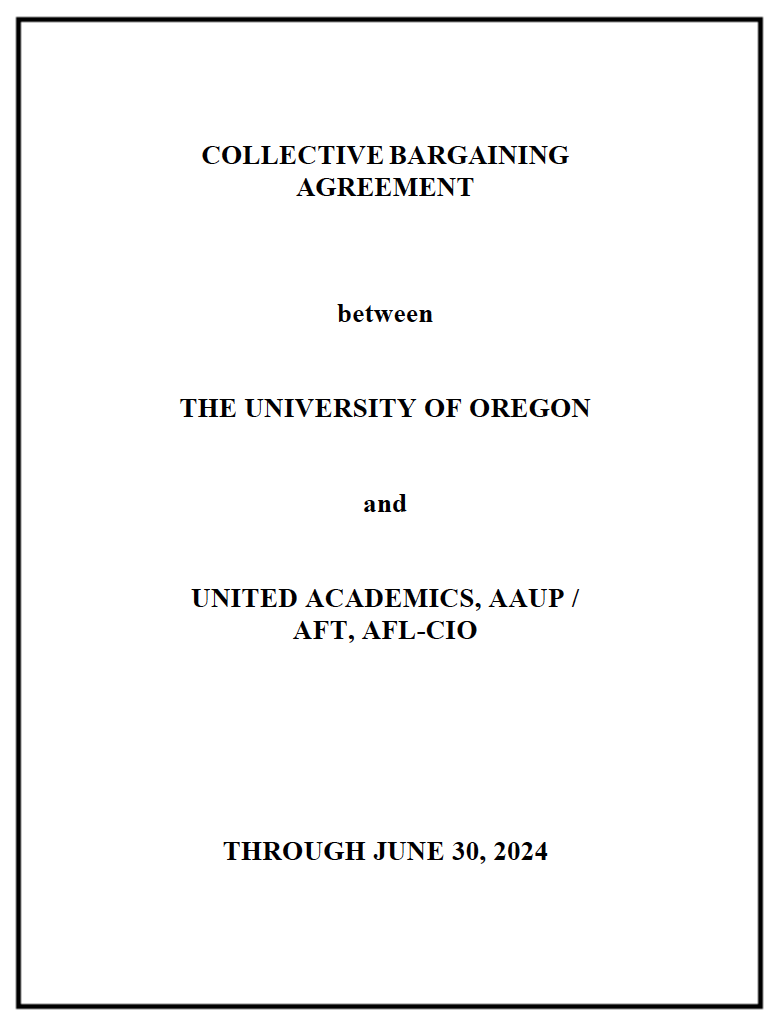